When you start adding elements to a page, you’ll likely notice that they stack one on top of each other automatically. At first glance this may make it appear there’s no way to place elements side-by-side.

But the good news is that our Columns Element can be used to add up to five columns to a page. This enables you place elements right alongside each other. The Columns Element is dragged to a page just like any other element.

The element starts with two columns, but you can add up to five via the toolbar that appears when you scroll over the element. Just click the appropriate number.

We’ll stick with only two columns for this example, but regardless of the number of columns they all work the same way: you drag other elements into the columns. 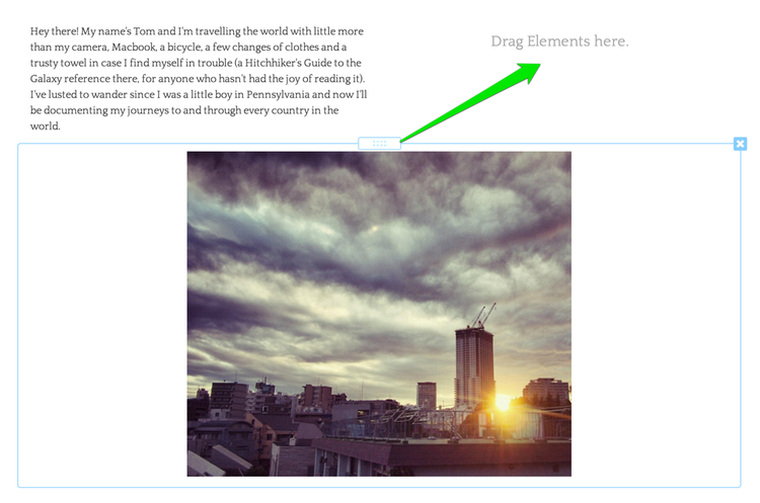 You can drag as many elements into each column as needed, and use the blue bar between the columns to adjust the width of each. Elements inside the columns will expand or contract as you change the column size.

The divider between the columns doesn’t show up on the published site so none of your visitors will see that.

You can add as many elements as you like to each column; they’ll just stack on top of each other as usual.  And you can add elements above and below the Columns element too, so part of the page can have two columns, another part one column, and another could have five. That’s entirely up to you.

Got question about how to use Weebly's basic functions like: Weebly Help Center have a lot of great resources!

The fastest way to have your questions answered is to spend a few minutes searching through our Wiki.

We spent a lot of time populating this Wiki with information relating to installation and our products.

If still can't find your answer, you can reach us here:

DivTag Templates are creators of Premium Weebly Templates, Plugins, Splash Pages and Tutorials. Our products are designed for Weebly users, enabling them to have a beautiful and professional looking website, all without having any design or coding background. You won't need to spend hundreds of dollars to create a professionally designed website - We've done the work for you!

Meet the FOUNDERS!
Read the story behind DivTag Templates